Homebuyers in the US have one of the lowest rates of property tax in the world, at just 0.35% compared to the G7 average of 3.6%, shows a new study by UHY, the international accountancy network.

UHY calculated an average property transfer tax rate in the US using state and city rates in place across the country – from the zero rates in Texas and Utah to the 1.5 percent and higher rates in New Hampshire and Delaware.

UHY says that the cost to Governments worldwide of the coronavirus pandemic could result in pressure to increase property taxes in the coming years. A combination of lower tax revenues and expensive economic stimulus measures will leave many countries with major budget deficits that will need to be addressed.

UHY Advisors explains that the US does not have a federal system for taxes on property purchases, allowing states and cities to set their own rates. While most have kept rates low at under 0.5 percent of the property’s value, some locations have begun to levy higher taxes.

Homebuyers in Washington D.C. are taxed at the highest rates in the country on their property purchases. Someone purchasing a home in the US capital is subject to a levy of 1.1 percent on the transfer of the property and another 1.1 percent on the value of the mortgage. That means a buyer in Washington D.C. is taxed at a higher rate than in the UK, China or Canada. The US’s zero-tax states for property transfers include Oregon, Missouri, Indiana and Idaho.

The average tax paid on a home purchase has risen quickly in recent years. A previous study of property taxes by UHY, in 2013, found that G7 countries charged an average of 2.29 percent tax on the purchase of a home worth $150,000. This has now risen to an average of 3.57 percent in 2020.

Dennis Petri, Chairman of UHY International says: “Taxing property purchases is one way to increase tax receipts to address the costs of coronavirus. However, US states’ tax systems for property purchases have traditionally taken the approach of keeping the burden on individuals low, and that allows Americans to move wherever they need to go to work. That has played an important role in building the robust economy this country has.”

“Not every state and city have the same low-tax approach, however. It can be a very unpleasant surprise for someone moving to Washington D.C., New Jersey or New Hampshire to find that the closing costs on their new home include several thousand dollars of tax payments to the state.”

“Luckily for most Americans, they will never have to deal with the double-digit tax rates on home purchases that they would face in some other parts of the world.”

UHY’s study also shows that several major developed economies now charge tax worth more than 10% on the purchase of a home worth $150,000, including Belgium (11.66 percent) and Japan (11 percent).

Rates of tax on a purchase of a home worth $2 million across the United States average just 0.39 percent, while Russia levy no tax at all on purchases of residential property, regardless of value.

UHY property tax advisors studied tax data for individuals purchasing a house worth $150,000, $1 million and $2 million in 27 countries across its international network, including all members of the G7, as well as key emerging economies.

All 27 countries ranked by the amount and the percentage of tax paid on a purchase of a $150,000 property – Spain, Bangladesh, Belgium and Japan all above 10 percent 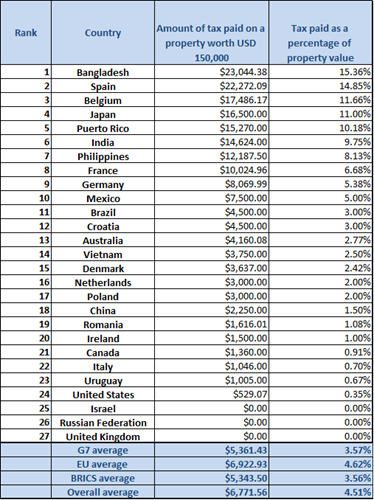 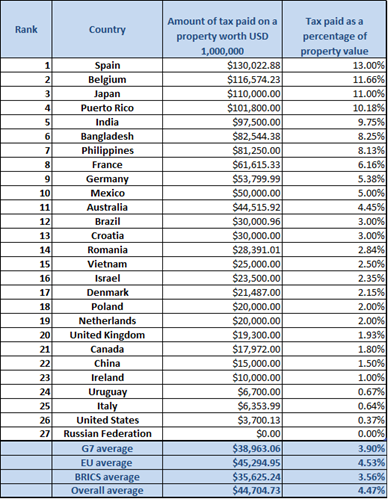 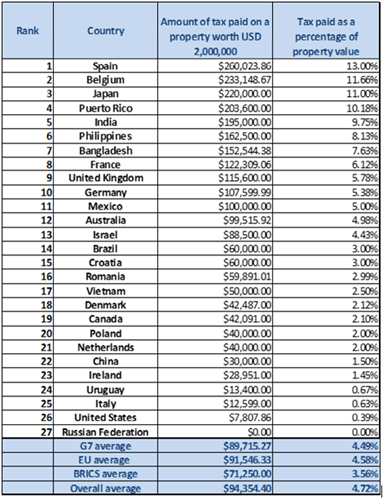