THE NEW ADMINISTRATION: WHAT THE POLICY CHANGES WILL MEAN FOR YOUR BUSINESS

The 2020 election cycle is now behind us, and a new administration took control on January 20. The new administration is markedly different from the former administration in very clear and defined ways. The differences pose new opportunities, and risks, for you as a business owner to understand and best take advantage of.

So, what can you as a business leader be doing today to best position your company for the changes? How can you use these opportunities to your benefit to positively transform? We will examine policy differences in two areas that will have the most impact on your business:

Perhaps the most significant change we can expect will be centered on policy related to energy production and the environment. The former administration was effective in reducing environmental regulations that resulted in increased production of fossil fuel energy (particularly natural gas and oil). In the last four years, nearly 100 environmental regulations were rolled back . Of these, more than half have been geared to reduce regulatory constraints and increase the production of domestic sources of fossil fuel energy. In addition, fuel efficiency standards were reduced, the Clean Power Bill was rescinded, and the United States withdrew from the Paris Climate Agreement. As a result of these policies, the United States moved to become energy independent and a net exporter of natural gas. 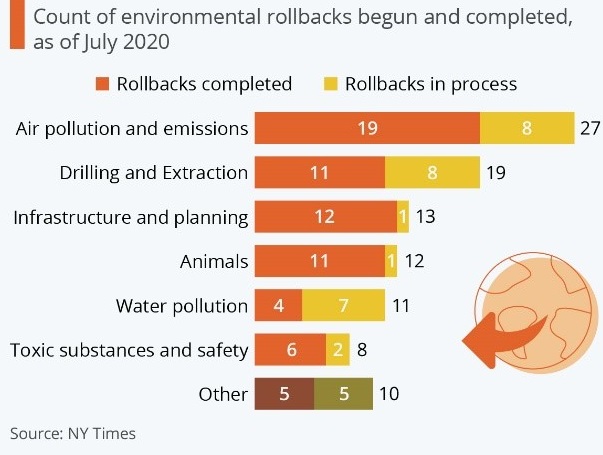 The new administration has put forth an ambitious “Clean Energy Revolution” plan. This plan is projected to be funded by $1.7 trillion dollars in Federal money and an additional $3.3 trillion from private sector, state, and local government funds. Under this plan, the following goals are stated: 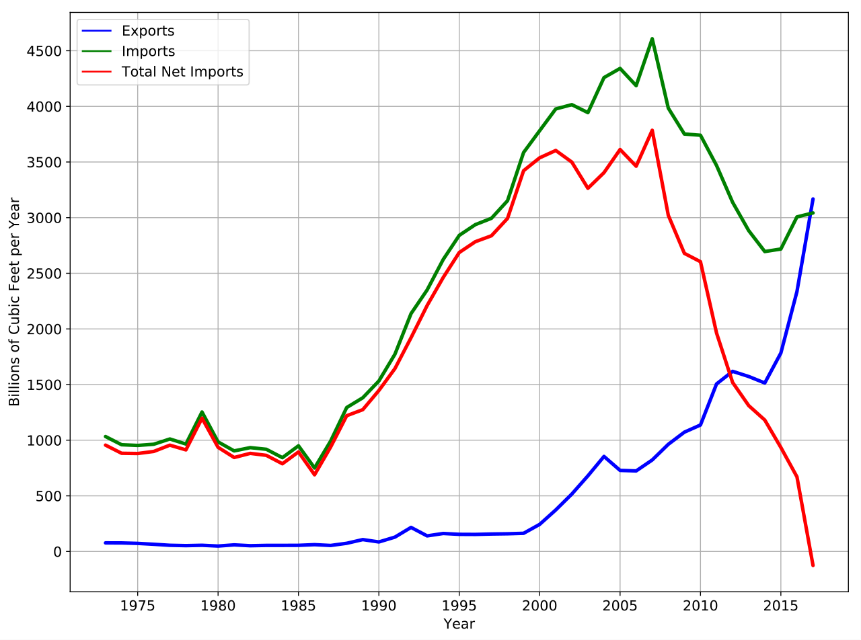 Opportunities and risks related to environmental and energy policy

The Clean Energy Revolution is expansive in its scope. A transformation of this scale to the United States infrastructure has not been seen since the New Deal, and it will not come cheap. To fund this, the new administration is proposing tax increases to corporations and individuals making more than $400,000 per year to generate more than $2.65 trillion dollars in additional tax revenues over the next 10 years.

Simultaneously, new markets in green energy infrastructure (particularly wind and solar) will emerge with significant growth opportunities, tax incentives, and research and development grants available for those businesses that can position themselves to take advantage of this market. The growth and opportunities have not gone unnoticed on the world stage. At the United Nations General Assembly this past September, Chinese President Xi Jinping declared that China would achieve carbon neutrality before 2060 after reaching peak carbon emissions by 2030 . This statement is not altruistically driven, but comes from China’s ambition to be the world’s leader in green energy tech. As China already produces 70% of the world’s solar panels, they are well positioned to take a lead role on a global stage for green infrastructure manufacturing.

Table 1 below provides specific actions for you to consider under the new administration related to energy production and the environment. The key takeaway is the amount of focus placed on moving the United States to carbon neutrality by 2035. This shift is a key tenet to the new administration’s agenda and will drive numerous policies and actions that will have an impact on you and your business.

Regardless of what the Federal Government may issue in the future, many companies have already taken a strong position on the issue of greenhouse gas (GHG) emissions reduction. For example, Walmart’s Project Gigaton is aimed at reducing 1 billion tons of GHGs from their supply chain by the year 2030 . In addition, many large companies have taken an early and strong lead in sustainability issues and GHG emissions reduction including Unilever, GE, and Kimberly-Clark. Suppliers that can clearly demonstrate carbon reporting and reductions are better positioned to do business with these companies.

As the trend toward GHG emissions reduction continues, active reporting and metrics will become more the norm in the manufacturing middle-market. So, what can you be doing right now? As a first step, if you have not already done so, consider consolidating and re-evaluating your environmental, health and safety functions to include sustainability with an emphasis on greenhouse gas (GHG) assessment and inventory in your processes and supply chain. 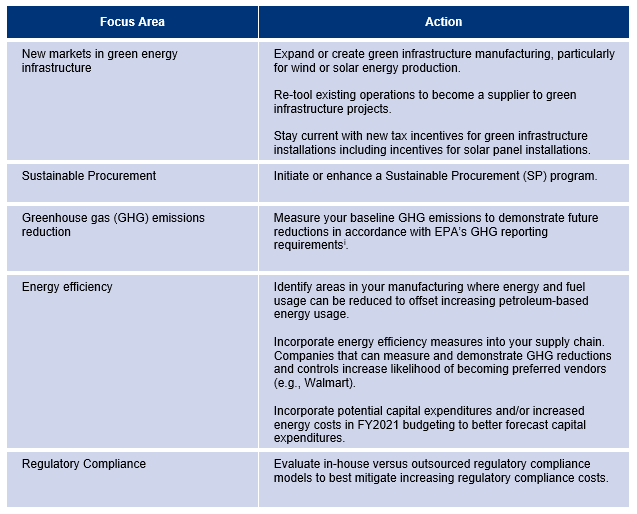 Relating to taxes, the new administration’s campaign policy stated that the tax cuts related to the Tax Cuts and Jobs Act (TCJA) of 2017 will be repealed, but only individual earners over $400K would see an increase in taxation, The implications of repealing the TCJA are shown in the figures below and indicate that the United States will have one of the highest international corporate tax rates as well as marked increases in taxes for individuals in the top 1% of earners in the United States . To limit corporate tax avoidance, the new administration is proposing tax penalties for manufacturers that offshore production. 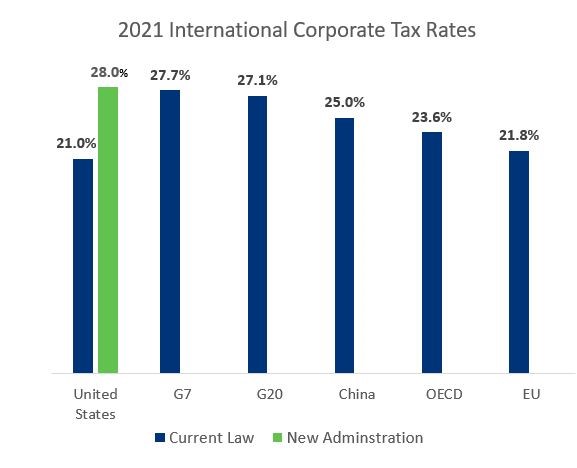 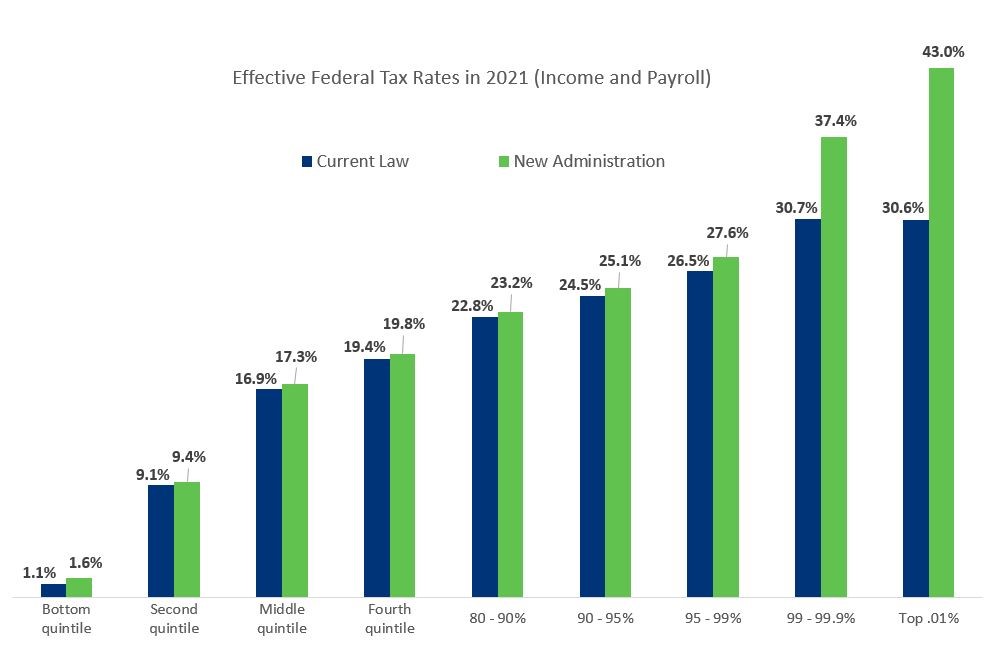 The new administration is not opposed to tariffs, but is a proponent of a global approach to leveling the playing field with those countries that are perceived to be trading unfairly with the United States. They are looking to form an international coalition with the World Trade Organization (WTO) to target these unfair trade practices as opposed to unilateral actions. The new administration is further proposing to define “fair” trade to limit future and retaliatory tariffs. However, they have not yet provided a definitive answer on what constitutes “fair” trade.

In terms of jobs, the Clean Energy Revolution is stating the transformation to a green economy has the potential to create up to 10 million new green infrastructure jobs in the United States with a potential offsetting job loss in the petroleum industry. There is a push for these new jobs to be unionized, creating a significant shift toward more unionization in manufacturing jobs in the United States. Tax credits have also been proposed for companies that can generate new union jobs in green manufacturing. Further, the new administration is also proposing regulatory changes to make the process of organizing easier and applicable to smaller businesses, and an increase to $15/hour has been proposed for the minimum wage rate.

As a first step, we recommend becoming familiar with the R&D tax credits at both the Federal and State levels. These are tax incentives geared to help companies move toward Industry 4.0 (the convergence of digital and physical technologies revolutionizing modern manufacturing). Industry 4.0 is somewhat loosely defined and provides an opportunity to help offset investments in your business with R&D Tax credits for:

Digital manufacturing: Integrating data from material specifications, to procurement, to production and shipping to leverage data across the whole of manufacturing for improved processes

Kaizen, Just-in-time and lean manufacturing: Focused on waste reduction and production process improvements
In addition to covering a wide range of opportunities for your business, these R&D Tax Credits could be coupled with your GHG emissions assessment to find areas to upgrade equipment toward Industry 4.0 while finding opportunities to offset the investment costs and better position your company for meeting GHG emissions reductions – a win-win for your business.

Additionally, tariffs will likely be an area of change. Depending on the new administration’s foreign policies, the tariffs may run their course and potentially be repealed. As a result, you may be able to reduce accruals related to the tariffs and free up cash for use in other areas. Another area that can be emphasized is adding “carbon adjustment fees” on countries that are not meeting the spirit of the Paris Climate Agreement and GHG emissions reductions. It is uncertain how these adjustment fees will be directly applied, but they would have a net effect of acting like a tariff on carbon-intensive goods from non-compliant foreign trading partners. 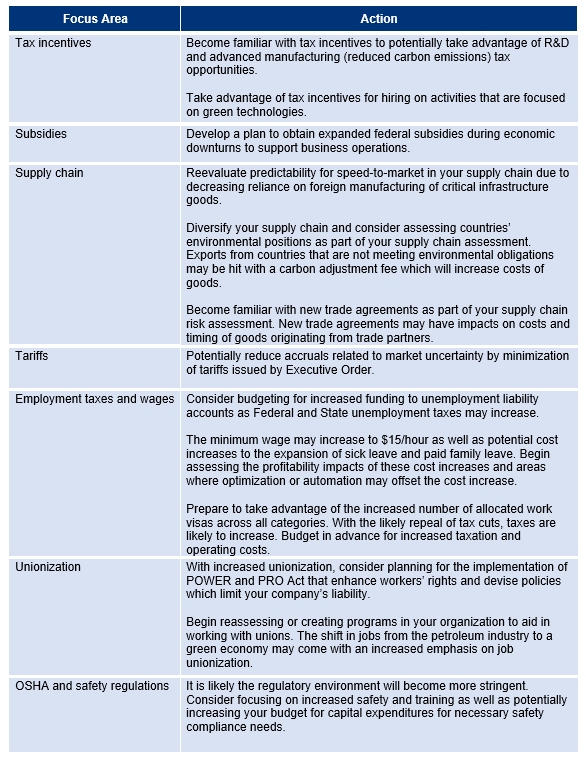 Change is coming. How are you going to transform your company to take advantage of the policy changes in environment and energy and taxes, tariffs and jobs? Developing a strong strategy will enable you to leverage the new opportunities while mitigating the possible risks. Think forward. What can you do to best position your company during the next four years?