UHY Advisors, one of the nation’s leading professional services firms, announces that the US has increased bank lending by 9% since the start of the COVID-19 pandemic. This is among a number of revelations gleaned from a recent study conducted by UHY International, a global network of independent accounting and consulting firms.

The study further reports that the US did a far better job than many countries in lending to businesses, outpacing the eight major EU economies who increased lending by an average of 5.3%. The country with the most dramatic increase in lending is Brazil, which increased its lending 18% in the past year.

“The US moved quickly to roll out large-scale lending packages once the pandemic took hold in March 2020. These have served as a lifeline for many businesses,” says Dennis Petri, Managing Director at UHY Advisors and Chairman of the Board of Directors of UHY International.

Outstanding lending to businesses across the ten biggest global economies hit a total of $32.7 trillion last year, an increase of $3.1 trillion (10.5%), compared to $29.6 trillion of outstanding loans a year earlier.

The following table has been excerpted from the study and ranks the 24 countries by the percentage of lending change over the past year. 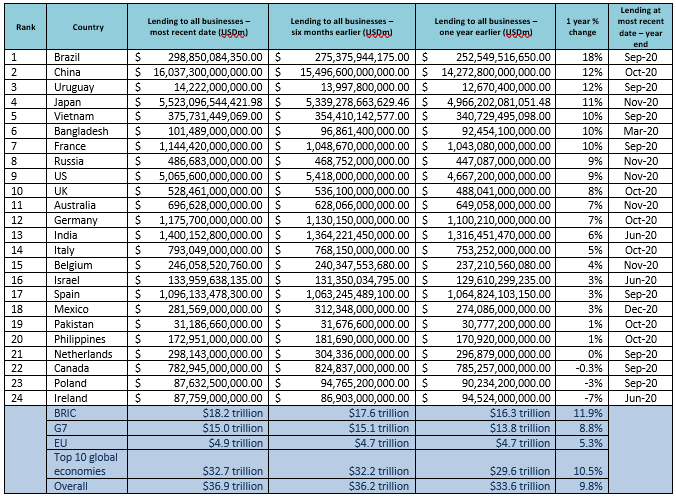 Click here to view the press release from UHY International.